As my final Capstone project for the Ecological Landscaper Immersion, I completed a carbon farming plan and design for a small, 3.5 acre sheep and goat farm in Santa Rosa, Heartfelt Fiber Farm. The farm enterprise focuses on fiber animals and the small flock includes primitive sheep breeds such as Icelandic, Shetland, and Ouessant sheep, Cashgora goats, one llama and one alpaca. The vision for the farm is a small-scale, sustainable, humane fiber farm, producing high-quality fiber in a range of colors in a natural environment and in an environmentally responsible way. 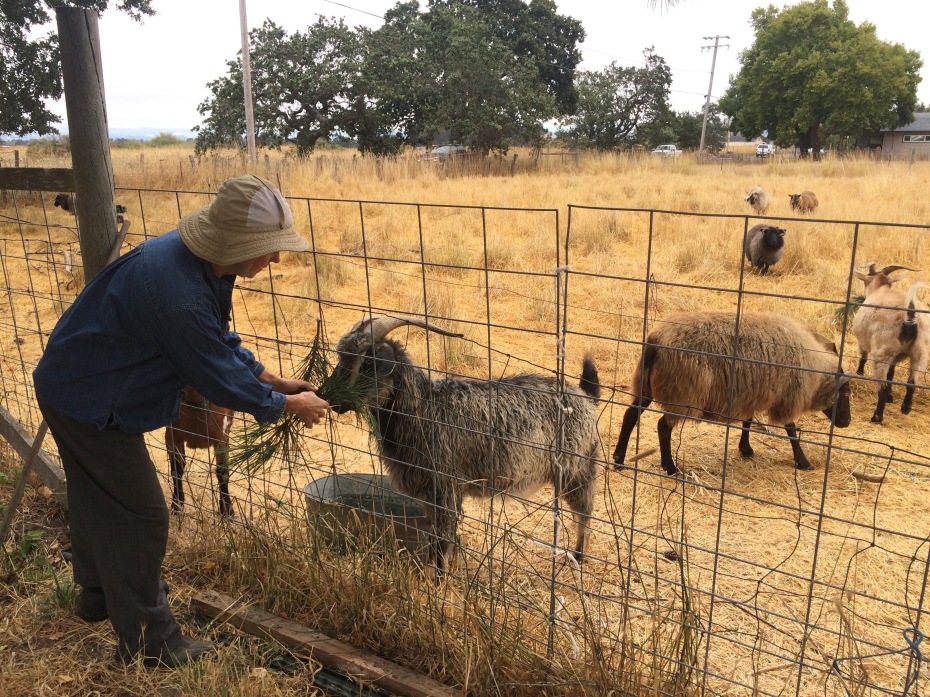 The main design drivers in this project were:

This design emerged specifically from the client’s interest in developing a carbon farming strategy for the farm. Hers is among the first pioneering farms that had expressed interest in the Sonoma Resource Conservation District’s Carbon Farming program. Carbon sequestration through local fiber production is also a distinct focus for Fibershed, the Marin County based non-profit that is spearheading the creation of a local, environmentally responsible and ethical textile culture.

At the same time, the carbon sequestration is only one piece in an interconnected whole of increased ecosystem, human, animal, and soil health. The bigger picture is one of Heartfelt Fiber Farm as a thriving farm that has a fully developed sense of place and identity. It celebrates its unique location in the plain of Laguna de Santa Rosa, which is of tremendous ecological and cultural importance. It demonstrates how a modern farm – in the era of climate change, and responding to its challenges – can do the work of restoring the biodiversity and native landscape of the Laguna plain.

…All this while also producing fiber, dye, edibles and medicinals and keeping the farmer, her family, and the animals happy and healthy – and yes, sequestering carbon.

What is Carbon Farming?

Carbon Farming is a planning and implementation practice that invites farm producers to become ecosystem stewards and mitigate global climate change by engaging in farming practices that have been shown to increase the sequestering of atmospheric carbon in soils and biomass. Pioneered by organizations such as the Marin Carbon Project, the Carbon Cycle Institute and Fibershed, carbon farming in the Northern Bay Area of California is emerging as a powerful movement, modeling how agriculture – instead of contributing to global warming – can in fact serve to mitigate its impacts.

As the Carbon Cycle Institute writes,

“Carbon can be beneficially stored long-term (decades to centuries or more) in soils and vegetation through biological carbon sequestration. Carbon Farming involves implementing on-farm practices that: 1) decrease the production of green house gases on farm, and/or, 2) increase the rate at which the farm supports photosynthetically-driven transfer of carbon dioxide (CO2) from the atmosphere to plant productivity and/or soil organic matter. Enhancing agroecosystem carbon, whether in plants or soils, results in beneficial changes in other system attributes, including; soil water holding capacity and hydrological function, biodiversity, soil fertility, ecosystem resilience and agricultural productivity.” (ABC Ranch Farm Report)

Although technically all agricultural production involves photosynthesis and therefore sequesters some carbon, particular farming practices have been identified as capable of increasing the farm’s capacity to capture and store carbon. Most of these practices are also included among the Conservation Practices identified and supported by the National Resource Conservation Service (NRCS).

The Carbon Farming practices proposed for Heartfelt Fiber Farm include:

Based on the COMET-Planner farm planning tool, the estimated carbon sequestration potential on the farm is 10.5 tonnes of carbon sequestered annually following implementation of these practices. The sequestration rates will increase over time as the plants grow in both above-ground and below-ground biomass.

Click here to learn more about carbon farming on fiber farms and the idea of Climate-Beneficial Wool.